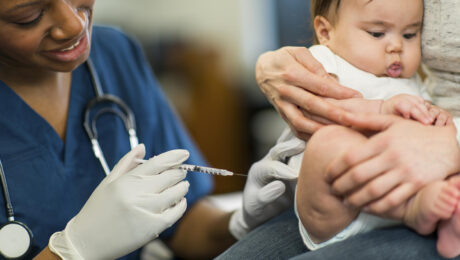 Vaccines protect babies and children against many dangerous diseases, yet there is still a great deal of controversy surrounding them. A lot of anxiety is based on myths and propaganda. Lets have a look at the facts and debunk the most prevalent myths of vaccination, because ultimately, this is a decision that you, as a parent will need to make for your child.

At the top of our list due to it possibly being the most pervasive of all myths. In the late 90’s a medical journal was published claiming that childhood vaccines cause autism. The study was retracted, and found to be an elaborate fraud. The Institute of Medicine released a report in 2004 that found no scientific evidence of a link between the MMR vaccine and autism.

Protected from the risk of vaccine-preventable diseases, immunized children have the chance to prosper.

The immune system, especially that of an infant, could never truly be overwhelmed because the cells in the system are constantly being replenished. Babies are exposed to countless bacteria and viruses every day, and vaccinations are minor in comparison.

Worldwide, measles kills 250,000 children every year. Outbreaks of measles, mumps and rubella still happen, especially in communities where many people and children are not vaccinated.

Vaccines can infect my child with the disease it’s trying to prevent: –

Vaccines can cause mild symptoms resembling those of the disease they are protecting against. Where symptoms do occur, the vaccine recipients are experiencing a body’s immune response to the vaccine, not the disease itself.

Vaccines do contain a variety of substances besides the viral or bacterial components: –

There are preservatives as well as adjuvants, these are substances, which help vaccines grab the attention of the immune system and prompt it to create antibodies.

Clearly there is an ocean of information out there regarding vaccinations, and as mentioned before the final decision lies with you, as the parent. We do hope that this has helped in making an informed decision.